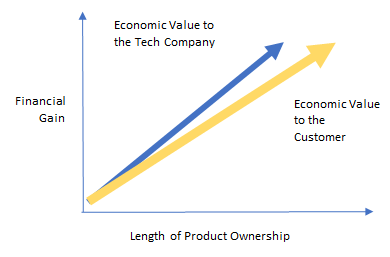 As cable operators race to meet the ever-increasing demand for bandwidth in the last mile, they continuously reduce the size of the service groups served by the access nodes. They do this by augmenting the number of service groups. For example, a service group of 480 homes passed will be split in four service groups, each consisting of 120 passed, and instead of one node serving the 480 homes, now they are served by four nodes. To split the service group, the operator needs to purchase upfront DOCSIS licenses for the additional service groups long before they can generate revenue from the added network capacity. Essentially, the operator incurs the capex, and bears the risk of generating an acceptable ROI from its investment. Although this model is rigid, it is typical of most customer-vendor relationships today. The customer (in this case the cable operator) commits up front, based on forecast of future demand, pays upfront for a solution, and often commits to a maintenance agreement. The vendor has minimal risk, because it is payed upfront, irrespective of the customer business outcome. This leads to a misaligned economic situation.

At the same time, technology is disrupting existing business models. For example, the increasing prevalence of XaaS means the customer can pay for what he consumes. Customers are beginning to demand more flexible business arrangements, especially as they contend with a highly competitive and extremely dynamic marketplace. Cisco has listened to its customers and introduced a pricing model that aligns its incentives with theirs. Rather than ask cable operators to pay upfront for licenses they will seek to monetize in the future, their new model, which they call Infinite Broadband Unlocked, makes the operators pay based on how much bandwidth their subscribers consume. Cisco sells the operator one simple perpetual license based on core peak bandwidth (CPB). Each quarter, the cable operators purchases additional CPB licenses based on the previous quarter’s increase in actual consumed peak capacity. If capacity goes up, both Cisco and the cable company benefit; if capacity goes down, the cable company pays less, and Cisco shares in the downside.

This model aligns the economic incentives more fairly; Cisco reduces the hurdles for its customers as they upgrade their networks, gives them a more predictable way to calculate their costs, and shares in the resulting upside. Furthermore, because the licenses are perpetual and remain an asset, the cable company can capitalize them in line with its existing operating model. Such economic models are likely to become more prevalent as the industry moves to a software-based infrastructure where pay-per-use models are the norm. The cable industry will certainly benefit from adopting more flexible business models as they migrate to a more flexible, software-based, elastic network architecture.
Click for more information about Liliane Offredo-Kreik.

Market forces and the insatiable demand for bandwidth, both upstream and downstream, are driving cable operators to modernize their network infrastructure and operations.

Virtualization Journey: Cable Companies Are on Their Way